Does anyone know the answer to this one?

ITV was blacked-out by 10 Aug due the the strike.

Several places list that the 9 Aug episode was screened - while KAL lists that episode being postponed until 8 Nov (after the strike).

Does anyone know if that episode get aired in some regions on the original 9 Aug date?
Top

Just to add to this - it looks like ATV were the host of this series and they didn't go off air until 10 Aug. Thames TV had gone off-air several days before.

So it could be ATV still played the programme out to a few regions still on air.

When the series restarted that re-run all the episodes in the assignment.
Top

While some might say that it's a barmy thing to have done without additional info being present, do note that Kaleidoscope's dates are for the HTV region, who only broadcast up to episode 3 before the strike. ATV may well have shown more (their own paperwork suggests that this is so).

This may well be a situation that calls for some extra tx details in there.
We all have to eat a peck of dirt before we die.
Top

Yorkshire TV screened up to and including episode 3, the one where Steel and Tully repeatedly sing 'Pack Up Your Troubles', but no further episodes aired after that before they went off air.

This is from (still fairly strong) memory rather than any personally documented evidence.
.. ah yes, well worn carpets and the pungent smell of over-boiled vegetables!
Top

Entries for Sapphire and Steel tail off rapidly mid July in the local newspapers, but the Reading Evening Post has this article. 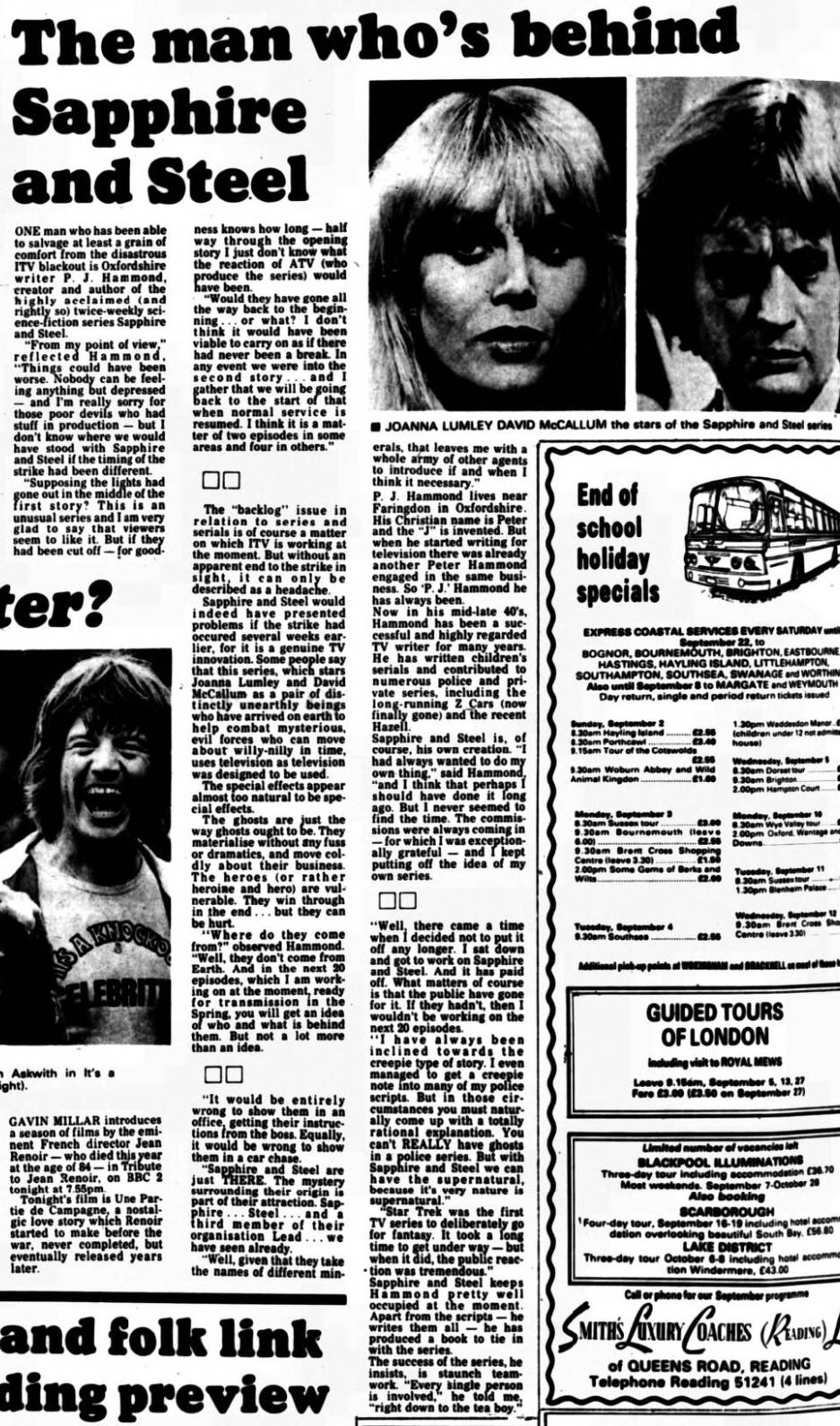 HTV had gone off the air quite early in the action. I suspect the definitive answer as to whether part 4 aired in ATVLand on 9th Aug is lost in time ??

TV listings show it - but it could have been pulled last minute.


Simon Coward wrote: ↑
Thu May 21, 2020 7:11 pm
While some might say that it's a barmy thing to have done without additional info being present, do note that Kaleidoscope's dates are for the HTV region, who only broadcast up to episode 3 before the strike. ATV may well have shown more (their own paperwork suggests that this is so).

This may well be a situation that calls for some extra tx details in there.

This is an interesting one!

I Video recorded "Sapphire And Steel" at the time, or rather the Tuesday episodes, the Thursday night episodes were recorded for me by a friend of my Dad's, because I was recording the "Doctor Who" repeats ( "The Pirate Planet" and "The Androids Of Tara") he would let the tape run and I would get other shows as well, such as "Thundercloud", a Yorkshire comedy series.

I certainly remember the sudden stop during the second story, I THINK', the Aug 9th one would have gone ahead, in the Granada region ( and likely the ATV one?) as I'm sure I recorded that night's episode of "Shelley", ("May The Best Man Win"), I notice that episode is listed with a 1980 date, when the series continued, but I am sure I taped it in 79.

The last episode of "Thundercloud" would have been a victim of the strike, I'm not sure if that was ever screened!
"A cup of Tea....Tea...Tea"
Top

I'm sure this has been asked in various places before, but does anyone know if the IBA (or whatever it was called at the various times) kept a record of the Programmes as Broadcast (PasB) in the same way the BBC have. Was it down to the individual franchise holders, or the authority as the broadcaster.

I know that a lot of the paperwork held by Ofcom, the most recent incarnation, was sent to Bournemouth University, but I never got a clear answer whether PasB records were among it. That would be the only true way to clear up a lot of these anomalies and unknowns.
Top

I've often wondered about that as well, but I don't think I have ever seen any.

Didn't Simon ( Coward) put something on a thread here about Scheduling "The Prisoner", ATV documentation ?, can't find it though.
"A cup of Tea....Tea...Tea"
Top

I'm pretty sure it was on the old forum, Mark, which disappeared a few months ago following a software upgrade. It's perfectly understandable why it had to go, but I must confess that if some warning had been given I'd have certainly saved some of that thread simply because it's the only place I've ever brought quite so much of that stuff together.

To answer your current question, the answer is in a way yes, in a way no.

The IBA (and now the BFI since the closure of the IBA Library) hold microfiche copies of a considerable number of programme schedule documents from the various ITV companies. They peter out in the mid-80s and I seem to recall that some regions' sets were more complete than others.

Those relating to the network companies tend to be more detailed as not only are those companies providing more programmes, but they tend to have to keep track of which other companies are taking each programme especially each of their - the network company's - programmes. The schedule will record actual start times, programme and episode details and where appropriate, things like the production number or VT number of the programme being played out.

What they won't contain is detailed production information, cast lists, music cues and so on, that you'd find on the earlier BBC TV PasBs. So they contain the schedule information equivalent to that on a BBC PasB but none of the info that later would be on a PasC.

Each company had their own format, there was no standard layout imposed on the companies by the ITA/IBA.

There's an example ATV one here.
We all have to eat a peck of dirt before we die.
Top

And to add a bit more, answering an earlier question.

Yes, at least some of the ITV companies had internal documents that contained the kind of info the stearn asks about. But the only ones I've seen tended to be quite structured, so more like a PasC than a PasB, really.

Rediffusion's were called PasTs - Programme as Telecast sheets. I've seen something similar from Granada, but I can't remember what they called them.

Those Rediffusion ones that were saved used to be available to consult at the IBA Library. I presume they've gone to the BFI too. Aside from the surviving Rediffusion paperwork which was donated to the IBA in the 1970s I'm not aware of any of them being preserved 'centrally' as it were, though what the individual ITV companies retain is anyone's guess.
We all have to eat a peck of dirt before we die.
Top

...Each company had their own format, there was no standard layout imposed on the companies by the ITA/IBA...

There's an example ATV one here.

That’s an interesting document and intrigues me somewhat more for what it doesn’t show. It doesn’t give any detailed information about the timing and positioning of commercial breaks for example, nor the length of parts for some programmes such as the length of each part of ‘The Untouchables’ for example. That sort of information was absolutely vital to the transmission controller who would ‘set his or her stopwatch off’ at the start of a part to know when it was going to finish and hence when to prepare and tx the next break etc. I note also the programmes are shown as ‘nicely’ starting on the precise clock minute which simply was not the case for the absolute majority of programming - absolutely not!

So, I think as the document itself shows that this is an advance programme schedule and not a transmission schedule. The tx schedule would be somewhere along a dozen pages or so at least (two dozen would not be unusual) and would show the sequence of programming, including promos and comms etc down to the precise second. It would also show each and every comm in each and every break. At the start of each day you’d get the first few pages and more would come down from the Presentation Office as the schedule filled up with the latest info (repositions comms etc).

In the TX control room itself were the tx controller, the assistant tx controller and importantly a loggist whose job was to hand amend the Tx schedule as to exactly what was transmitted as and when as the day wore on. The loggist was there from the start of tx until closedown.

I do not know where these precise documents ended up or whether indeed they were mandated by the Authoirity, I imagine they were indeed a legally required requirement.

Interesting to note that ‘How’ was a local transmission, I always thought it was a networked show so perhaps it was a repeat?
Top


I do not know where these precise documents ended up or whether indeed they were mandated by the Authoirity, I imagine they were indeed a legally required requirement.

Interesting to note that ‘How’ was a local transmission, I always thought it was a networked show so perhaps it was a repeat?


I think some time ago it was Simon that presented one here from the night ATV started The Prisoner... fascinating, IIRC showed everything including the advert timings, where each of the programme signals were coming from etc
Top

Sorry about the forum. The data has all been retained and I'll see about finding the relevant thread and manually posting it here.
Top

yellowtriumph wrote: ↑
Mon May 25, 2020 8:15 am
Interesting to note that ‘How’ was a local transmission, I always thought it was a networked show so perhaps it was a repeat?

Not a repeat, just a series that wasn't simultaneously networked. As shown in that document, Tyne Tees also took How on that day, but the remainder of the network had showed it the day before at 5pm, while those same two companies were showing a Tyne Tees series Man Bites Dog.
We all have to eat a peck of dirt before we die.
Top

stearn wrote: ↑
Mon May 25, 2020 9:28 am
Sorry about the forum. The data has all been retained and I'll see about finding the relevant thread and manually posting it here.

You did what you had to do, the forum's still going and you saved the data.
We all have to eat a peck of dirt before we die.
Top

Thanks for the info, fascinating stuff.

Didn't realise that "Prisoner" thread was that long ago, it certainly was a good one.

It would be nice to have more info on trails and commercials, ( as Yellowtriumph mentioned) more details on continuity for instance, apparently Vikki Chambers was a guest announcer on ATV, around the time "Escape Into Night" was shown, and there have been other instances of guests doing some continuity.
"A cup of Tea....Tea...Tea"
Top
Post Reply
17 posts • Page 1 of 1