Just wondered if this was worth a mention. Keeping my fingers crossed that some old re-prints could emerge out of this purchase.

Surely a complete 'Action' reprint must be on the cards.

I've got them all digitally, but I'd certainly buy the books if they reprinted.
If I were creating the world I wouldn't mess about with butterflies and daffodils. I would have started with lasers, eight o'clock, Day One!
Top

There's a brand-new Action special coming out in March - one of many specials that Rebellion are doing in 2020. 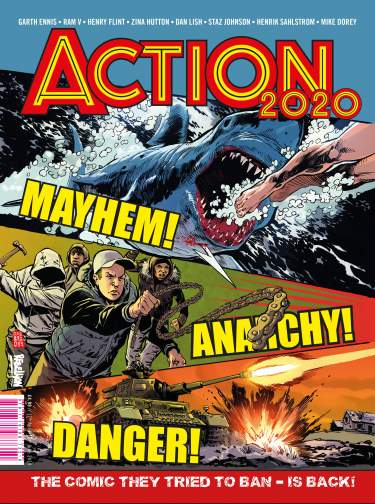 If you buy them all from their website as a bundle then you'll also get (drum roll...) a facsimile of the pulped 23 October issue (though it's doubtful they'll print it on the original bog paper the rest of the series was printed on - or to the same dimensnions.

It horrified prudes and censors alike – but the ground-breaking Action is back! The 1970s comic they tried to ban returns with the same blend of unbeatable characters and no-holds-barred action – all brought to you by the best talents of today! Featuring the killer shark Hookjaw by Dan Lish, juvenile delinquency in Kids Rule OK by Ram V and Henrick Stahlstrom, frontline German Panzer with Hellman of Hammer Force by Garth Ennis and Mike Dorey, merciless secret agent action with Dredger by Zina Hutton, and the brand new Hell Machine by Henry Flint. Plus, the exclusive edition available from the 2000 AD website will come with a bagged reproduction of the ‘banned’ issue of Action from October 1976!

I've not heard of most of those creators, barring Flint and Ennis, so it's caveat emptor - I really didn't enjoy last year's Buster special, but c'est la vie...

Ennis, of course, has been gagging to write Hellman since he was about six years old. When he got the call for this gig I imagine he was dancing around the room in his pants.

Stop quoting the law. We have swords.
Top
Post Reply
3 posts • Page 1 of 1